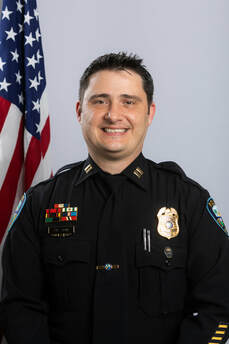 Joshua Stone, who was promoted to the rank of commander after five years of distinguished service as a sergeant, is the commander of the Community Resources Division. In this role, he oversees crime prevention, school safety, accreditation, training, recruiting & screening, and internal affairs.  Commander Stone grew up in Gulfport, and he has been with the agency since 2001.

Commander Stone, who has also served as a detective and as a patrol supervisor during his career, is an adjunct instructor for the law enforcement academy at St. Petersburg College.

A graduate of the University of South Florida, Stone has a Master of Arts in Criminal Justice Administration and a Bachelor of Arts degree in criminology, and he is a graduate of the 259th Session of the FBI National Academy. 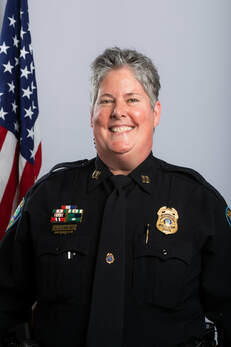 Commander Mary Farrand is currently the commander of the Operations Division, which oversees patrol, investigations, and operational support. Mary has been with GPD since 2001, having come to us with experience as a dispatcher for the Clearwater Police Department. Among her more notable achievements, Commander Farrand received the officer-of-the-year award in 2005.

Commander Farrand has a Master of Science degree in Criminal Justice from St. Leo University, and she is a graduate of the Florida Law Enforcement Executive Development Seminar. She has advanced certifications in hostage negotiations, background investigations, internal affairs, and traffic specialist certifications. 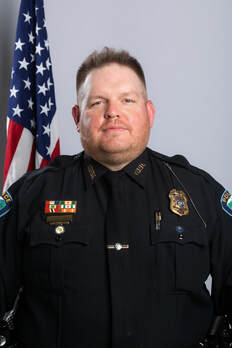 Sergeant Robert Burkhart, badge #562, started his employment for Gulfport as a dispatcher, and    he was sponsored by the agency to attend the local police academy.  He began his career as an officer in 2001, and he was quickly promoted to the position of detective, where he distinguished himself by earning the officer-of-the-year award in 2003.

Among Sergeant Burkhart's accomplishments, he helped pioneer the agency's marine patrol efforts, and he is now the supervisor of our special operations section, which includes marine patrol, K9, special events, and off-duty details.  He also holds advanced certifications in death and sex crimes investigations.

Sergeant Burkhart, has an associate's degree from Williamson College in Philadelphia. 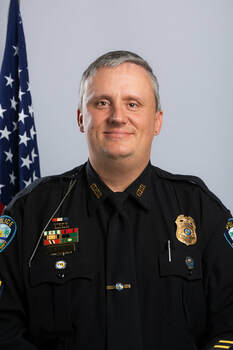 Sergeant Michael Vandenberg, badge # 571, was promoted in 2008 after five years as a patrol officer and field training officer. He is now the supervisor of the Bravo Patrol Squad.

Sergeant Vandenberg is a graduate of Florida State University, where he earned a Bachelor of Arts degree in criminology.  Before coming to work for Gulfport, he completed a professional internship with the Florida Department of Law Enforcement.

He is one of two Gulfport officers who is certified to investigate fatal traffic crashes. Sergeant Vandenberg is also a certified emergency vehicle operations instructor. 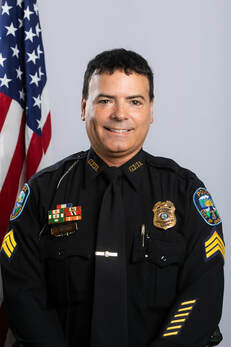 Sergeant Michael Marotta earned his promotion to the rank of sergeant after almost nine years' service with the Gulfport Police Department.  Before his promotion, Sergeant Marotta devoted much of his time to investigating DUI offenses and training new officers in our field training program.  He is the supervisor of the Delta Patrol Squad.

Sergeant Marotta graduated from Harrisburg Area Community College in Pennsylvania, where he earned his associate's degree in Criminal Justice, and he is now pursuing his bachelors degree. He is also one of our most highly trained personnel, having completed over 900 hours of specialized training and earning advanced certifications in several areas of traffic enforcement, crisis intervention, and marine patrol. He is also a graduate of the 24th Session of the Florida Criminal Justice Executive Institute's Leadership Academy. A 2004 Officer of the Year, Sergeant Marotta is the only police employee to have earned the Meritorious Service Medal twice! 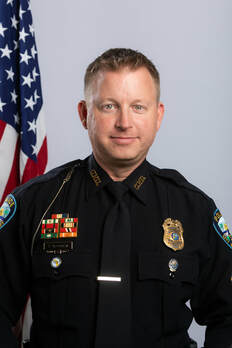 Sergeant Thomas Woodman was promoted in January 2011 after serving with the Gulfport Police Department since 2006 and in various capacities including as a Field Training Officer and marine patrol operator. Sergeant Woodman is currently assigned as the supervisor of the criminal investigations section and the special enforcement team. 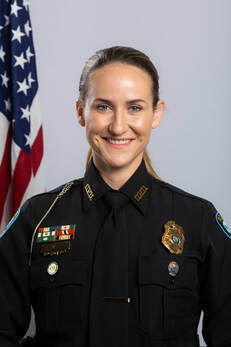 Sergeant Wiltse joined the agency in March 2006 after graduating with a bachelor’s degree in criminology from the University of South Florida. Sergeant Wiltse is currently the supervisor of Alpha patrol squad and was the 2014 Officer of the Year. She has several advanced certifications including field training officer, sex crimes investigator and breath test operator. Sergeant Wiltse is also a certified crime prevention practitioner and crisis intervention team member. 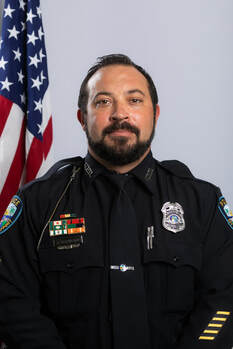 Sergeant Kellington came to GPD in 2003 following four years of service as a corrections deputy for Pinellas County. He is a certified instructor in defensive tactics and less lethal weapons, and he also has served as a field training officer and as a member of our marine patrol. Sergeant Kellington, our 2017 Officer of the Year, is pursuing his associates degree at St. Petersburg College. He will be assigned to lead one of four patrol squads.
Proudly powered by Weebly